The Bluecircle is now four years old. The “Home Depot” pines and oaks planted in late 2010 are soundly established, or at least the survivors are.  They have much company now since the last two summers have been kind to seedling trees.

We have transitioned from vacation and weekend visitors to full-time residents but still find there’s more mowing, trimming, planning and planting to do than days in the week allow. Moving from city to farm, from office to the outdoors, the daily variation in weather is still amazing. The right boots and rain gear, good gloves and a sharp knife turn out to be critical.

Each species of our trees has had a different early early childhood. The sycamores have proven very durable.  Several have emerged from the field grass months  after they were reduced to dead branches and given up for lost. Their light green leaves are large and distinctive so they stand out – unless shredded by the dread Japanese beetle in July and August. More than a few oaks have recovered from chewed bark or sad encounters with the bush hog mower, but they lag way behind their more fortunate brethren. The black walnuts and other nut trees grow slowly, but those that survive their first year have made steady progress.

The hybrid poplars have thrived with only occasional mowing between their rows.  Some in the first planting are now more than thirty feet tall and a favored site for groundhog dens.  A leaf or two at the very top branch is the last to fall in October and waves like a triumph flag at the end of another growth year.  In the photo above a rows of poplars tower over the Scotch pines and early lake-effect snow.  The pines have grown more rapidly than anything but weeds and poplars.  Some brown and die for no apparent reason, but most are doing well and will soon become the most abundant conifers.  Short-needled fir and spruce are scattered through the Bluecircle rows – eventually they will add variety to the treeline. 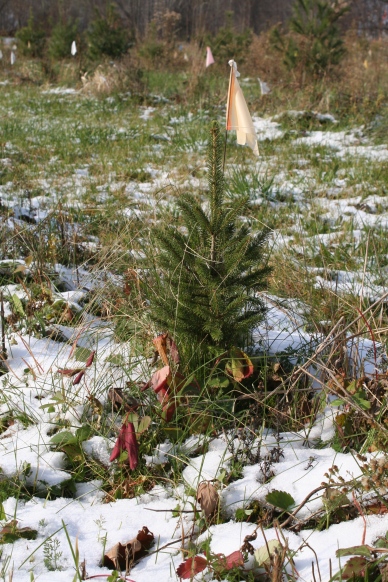