Most Bluecircle months yield discovery.  In March the melting drifts finally gave way to brown sand and sticks, but colder than usual weather delayed the first bits of green that promise the growing season ahead.  On cloudy days the Conservancy woods looked as much dead as alive.  Toppled and broken trees, victims of storms or disease, mutely block paths or place heavy burdens on their standing neighbors.  But swaying of still limber treetops in the afternoon wind argues that the broken grove will survive. 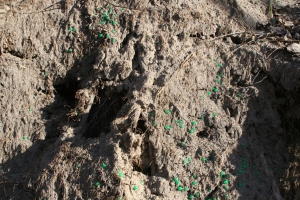 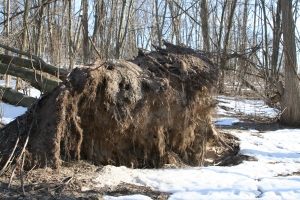 So what about the mystery?  A day or two after St. Patrick’s Day the thin roots of an uprooted tree bled green, dripping glassy beads into the sandy crater where it recently stood.  If it had not fallen at the edge of a walking path, and if its limbs and branches had not obstructed other ways up the hill the beads would not be seen – unknown they would have washed back into the sandy subsoil.

There were no holes in these beads so they would not have come from a broken string.  There were too many to have decorated lost jewelry, or a sash.

To be entangled in  roots of a substantial tree they must have been lost many years ago.  Their past is a unknown – but those that remain on the path have already rejoined the woodland cycle of growth and regeneration. 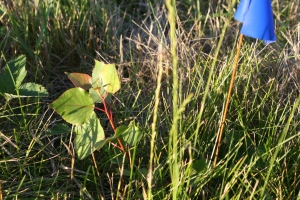 The end of May and the last of this year’s hybrid poplars, pines and oaks finally made it into their assigned spaces. Competing priorities this year included staying ahead of rapidly growing grasses throughout the Bluecircle, thanks to regular rains, and a new garden plot. Another project, new oak flooring in the kitchen addition, came from “sustainable Appalachian forests”. It’s premature to claim success with oaks, but at least some of our tiny red oak seedlings survived the onslaught of hungry rodents under our now-departed snows. 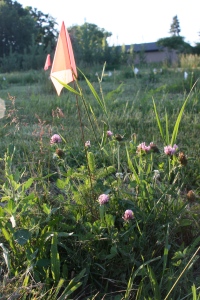