There’s been no shortage of snow, drifting and cold on the Bluecircle this winter, meaning the cross country skis regularly have a fresh path ahead.   The daily route goes east along one boundary, then downhill to the marsh and back west to the Conservancy.   Last week an unseen hawk left wingprints on takeoff from the dry lake-effect snow, and a red fox skirted the perimeter as he made his way towards the marsh.  There are few footprints on the coldest days; even the deer have taken cover.

The season’s quiet is broken at times by Sophie, an adolescent German Shepard who is the farm’s newest resident.  When she happily bounds through drifts her chest and shoulders leave oval craters in the snow that nearly hide the fact that legs and paws carried her forward.  Sophie would like more rabbits to come dance with her in the snow.  Based on the speed at which she removes stuffing and squeakers from her stuffed toys , this would not end well for the bunnies. 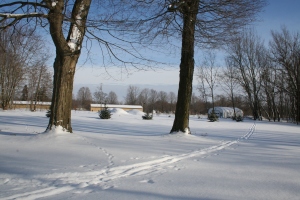 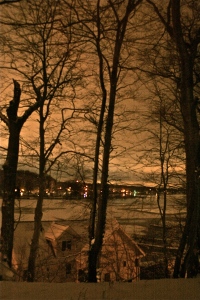 This Bluecircle chronicle lagged behind events in 2013 and left the end of Summer and passage of Autumn behind.  A renovation adding writing space to the not-so-big house overlooking the lake was designed and begun, and the work of forsaking city life for retirement was advanced.   Boxes of books, antiques, clothes and the remaining   garden tools made their way to the garage where some were destined to be discarded, but more made their way to the truck.   Things, images and words forgotten in the past were rediscovered, and sorted anew.   After Autumn’s seasonal changes that demand preparations and rituals of passage for the new year the relative quiet and peace of  long winter nights and ski trails is  welcome.