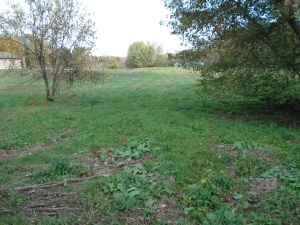 In late October 2010 deep old furrows and groups of bush-hogged stumps bore no relationship to the irregular outlines of the property that was to become the farm.  A survey showed that nine corner posts would be needed for property lines created by multiple adjacent plats and subsequent divisions of ownership.  The northwest corner was defined by an old oak tree, another was a bend in an otherwise straight boundary on the north.  Because the southwest corner was at the crest of a small hill new markers would be needed to define the south and west boundaries, and at some points the “rediscovered” property line was closer to decades-old summer cottages than we, or their owners, expected.  When  the last leaves had fallen in the wooded area to the west dense underbrush was no longer a barrier and a few posts were driven to identify the boundary of the adjacent Woodland Conservancy.   Lake-effect snow is abundant at Paw Paw lake, and as it blew off Lake Michigan and buried the stubble and stumps it was time to begin planning the Bluecircle farm.